All Collections
How Drawings Work
What are the rewards? What are my chances?

What are the rewards? What are my chances?

J
Written by Jeff Johnson
Updated over a week ago 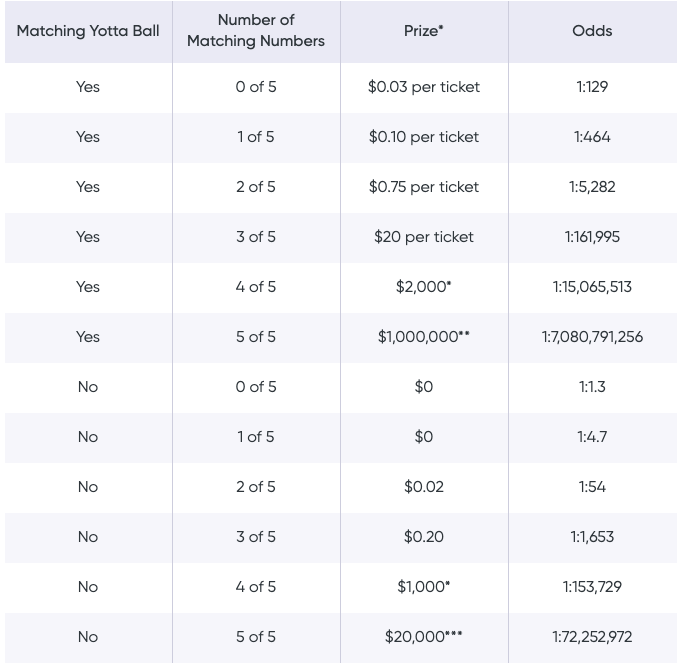 *If the prize does not say “per ticket” then the prize listed will be split equally amongst all individuals at that level. For example, if there are 3 matches with the same number of numbers (including the Yotta Ball) the prize will be equally split amongst those three individuals.

**The grand prize will be paid in 24 monthly installments with each installment equal to $41,666.67.

***If there are multiple winners, the winners will split evenly, which will be paid to relevant winners over 6 equal monthly installments.

Prizes will be awarded to your Yotta Account once you have $25 on deposit in your account. If you do not have a Yotta Account you will be mailed a check. Prize is non-transferable and no substitution will be made except as provided herein at the Sponsor’s sole discretion. Sponsor reserves the right to substitute the listed prize for one of equal or greater value for any reason. Winner is responsible for all taxes and fees associated with prize receipt and/or use. All federal, state, and local tax liabilities, as well as any other costs and expenses not specified herein as being awarded are the sole responsibility of the Winner. Prize will be awarded only if the potential prize winner fully complies with these Official Rules.

Did this answer your question?